Lessons from the Andes Mountains – Yoga in Action

AcroYoga: Just for the hot, fit, and sexy? 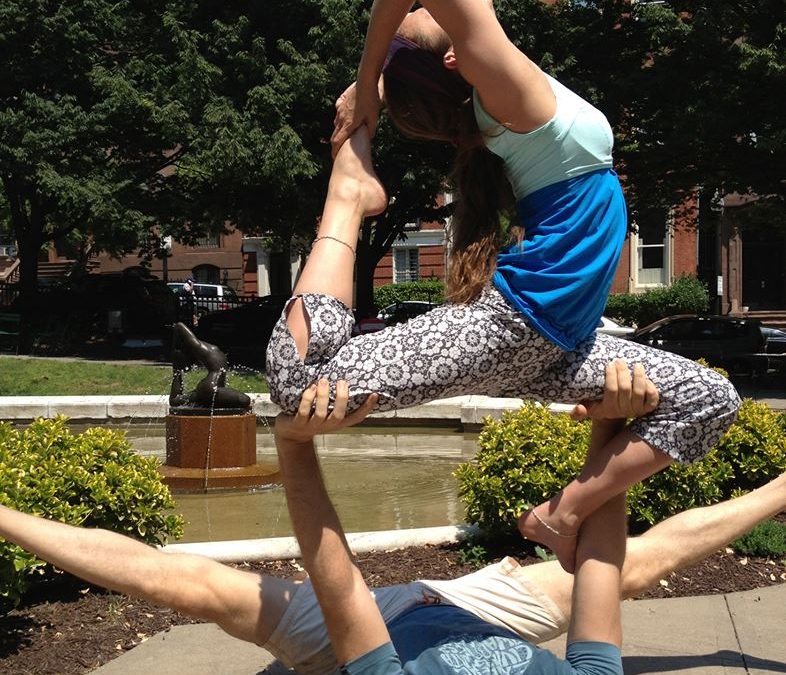 It’s true – the current yoga trend is fitness. Throw on your tight yoga pants, sports bra, and prepare to sweat until you drop or at least until you bend so close to the floor that your back feels like it went through a washing machine; does this resemble your experience with yoga? And now of course it gets even more extreme, you may say, AcroYoga? Yoga that incorporates Acrobatics – have we gone too far? 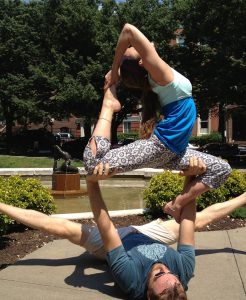 When I tell people that I am becoming certified in AcroYoga, they usually look at me with a mix of suprise, intrigue, and/or disaproval. I have always been known in Baltimore as a beacon of light in the hot, fast, sexy yoga world. Chanting before and after classes, teaching meditation, studying in India, people usually associate me with the “spiritual” and those hot yoga places with the acrobatic. They are shocked that I would study AcroYoga and even more so that I would find spiritual potential in the practice. They are shocked that I am interested in such a practice at all. I can not even count the amount of times people have asked me if I plan to join Cirque du Soleil. 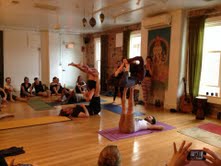 It’s true – there is a great deal of acrobatics in the practice. Hand to Hand, foot to hand, foot to back; you name it. If bodies can stack and align with gravity in a position, it happens. And we Acroyogis love to post the pretty and acrobatic pictures all over Facebook and around town. However, that is what Acroyogis call “solar practice”. The more strengthening feats and quick transitions that are part of standard acrobatics are just one aspect of the AcroYoga practice. 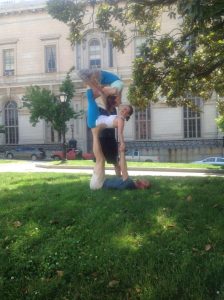 AcroYoga is a blend of acrobatics, yoga asanas, and thai massage and in fact can be entirely therapeutic. The therapeutic practices are some of the most therapeutic I have encountered for a number of reasons. 1. the necessity to align with gravity becomes so clear when working in partnerships of this kind that it is impossible to fake postures. And when we entirely align with gravity the “flyer” (or the person suspended above the body of the “base” partner) receives an incredible amount of traction and release between the vertebrae of the spine. I mean lets face it, as human beings, when we evolved to standing on two feet, there have been some drawbacks: strong quadriceps and gluteus maximuses and weak inner thighs/adductors have led most of us to walking around with our feet unconsciously externally rotated. That rotation is further enhanced by sitting in chairs and cars all day. Before you know it, lower back pain is almost inevitable in most modern day people. The traction received for the “flyers” and the sacrum massage received for the “base partner” becomes unlike any massage one can get in a reclined pose. It’s even more therapeutic in my opinion. 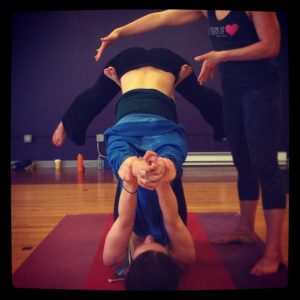 2. The therapy extends to the emotional sphere. The trust developed between flyers, bases, (and the all important spotters) develops immediate friendships in a way that doesn’t happen in your average yoga class, either because the studios are so hot, fast, and sexy that students are in and out of the revolving door or because students are so blissed out and meditative after a good yoga class that they quietly exit the building after class. AcroYoga forces clear and balanced communicaton during the practice and time for decompressing is given. It’s a time when we can learn boatloads about the way we communicate and our tendencies in relationships! Above all, it’s a wonderful trust building exercise. 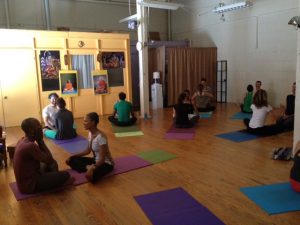 3. The thai massage that is taught and received after the therapeutic flight is simply healing for the giver and receiver. The concept is that one develops “metta” or loving kindness through therapeutic touch. By leaning one’s body weight through straight limbs, the giver learns how to give a massage without physically manipulating flesh and tiring. The giver can actually be more energized after giving. It’s a win/win. 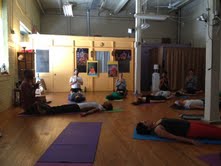 I promise that you will leave feeling melted and with at least 2 new friends! Friendship is spiritual in my book and so is AcroYoga if taught from this intention. 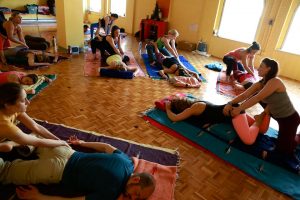